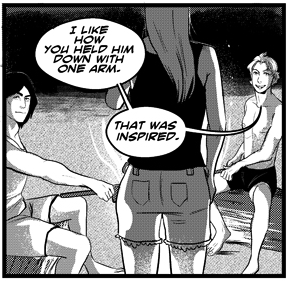 The story of Samaire's life.
Morning to Moon

is a weekly webcomic chronicling the life of a former bodyguard named Samaire Edelweiss who finds little meaning in her life after the incident that changes it. Desperate to make end's meet, her husband Ashe goes to work in a large city to support them and Samaire is left alone in a cold world with seemingly no use for her.

After seeking a position as a maid, she encounters a strange creature in the mysterious rural community of Golden Lake. Her would-be employer strikes her a deal: if she can wrangle the creature (she is, after all, a trained swordsman) she'll be paid an entire month's wages in advance. She accepts, takes care of the threat and soon learns the problem is bigger than she thought it was. A lot bigger.

Samaire begins to see opportunity (dollar signs) before her eyes. She contacts her husband, and explains the community needs her help, their exciting lives might return and oh yeah, people are willing to pay.

A quick assemblage of a team later, Samaire and company journey back to Golden Lake. It doesn't quite go as planned.

Morning to Moon provides examples of: