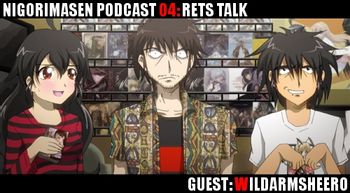 One does not care to acknowledge one's mistakes of youth.
Advertisement:

is a Webcomic started in 2006, revolving around the adventures of Rets, a "borderline hikikomori" otaku with a penchant for lolicon, Tina, a yaoi/shotacon fan who is inexplicably Rets' best friend, Brad, the shopclerk who is constantly irritated by Rets, and Rets' Japanese internet friend Go.

The title is a relatively famous (quoted twice in Otaku no Video) quote from Char Aznable of Mobile Suit Gundam.