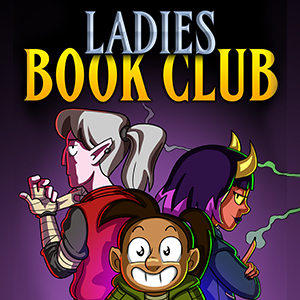 One final adventure... or maybe not?
"Right! (ugh) Sorry! Hey listen... I got a crazy idea. (hrgh) You know that road trip we were going to take to College? What if we left right now?
— Legzi
Advertisement:

An eight-issue comic miniseries spun-off from the Role-Playing Game web show Drawga, produced by Drawfee. Set before Season Two, it tells the story of the eponymous Power Trio's last summer before college.

Legzi is estatic to be going to Darkmouth University in the fall with her friends Gina and Rox, only to have her dreams crushed after having had her application denied. Realizing that this could be the end for the Ladies Book Club, she decides to run away from home with her besties and start their college road trip early, without telling them that she's probably not coming along to Darkmouth when this is all over...

The comic was written by Jacob Andrews, Julia Lepitit (who played Ryjinah and Rah'ōxah in Drawga, respectively) and Tony Wilson. Different female artists were chosen to illustrate each issue.

Originally published on dropout.tv with US access only, it has since been made avaliable for an international audience on Webtoons

Shares a character page with the main show.