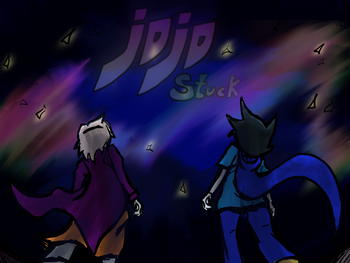 As if these weren't bizarre enough separated.
Eridan: okay wwho cockblocked me this time
Rose: The universe.
Eridan: figures
Advertisement:

fancomic created by Griever1337. It is, as its name implies, a crossover between Homestuck and Jojo's Bizarre Adventure.

The story begins when the alternate John Egbert with retcon abilities teleports into a bizarre new world, straight into a jail cell containing Rose Lalonde, who refuses to leave her cell for the moment due to something she perceives as an "evil spirit haunting her". But things are not quite so edgy for long. After some brief shenanigans, the somewhat more benevolent (but no less shady and worrying) Doc Scratch tells the two that the spirit is her "Stand" - a ghostlike being that fights alongside you with powers ranging from simple but powerful to the truly bizarre and situational. They're like superpowers if they were also ghosts manifested from your willpower.

Scratch goes on to explain that the Jade Harley of this universe (now a friendly but evil 120 year old vampire with the body of Rose's great grandmother from the neck down) has resurfaced and is sending other "Stand Users" to kill them, and that they need to stop her before Rose's mother, Ms. Paint, dies due to Jade's blood connection killing her (read: it's basically just a contrived evil curse and doesn't really matter in terms of details). After a little bit, Rose (whose mother is in danger), John (who wants to help this version of his friend since he's going nowhere and he's just a generally good guy), and a ragtag band of misfits journey to Egypt, where Jade (who is still an evil dog girl vampire) awaits.

The plot and general world structure both come from JJBA’s Part 3, while the characters are supplied by Homestuck. Notably, the majority of characters in the fancomic are translated to Jojo’s plotline based on the Official Homestuck Tarot Cards.

For those that are unaware, Stands in Jojo’s Bizarre Adventure were named first after Tarot cards, and as a result, the Homestuck character on the corresponding card would replace the Jojo character with the stand. This leads to a high number of absurd circumstances.