Joe Is Dead - A webcomic about living and dead pirates. 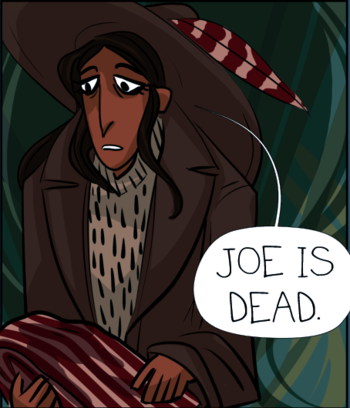 Joseph Cinnabar, Celestial Specialist of the small sailing ship The Sicillian Songbird, former mentor of the Honorable Captain Harriet Hopper... is dead. And it's up to one disgraced crew-member to embark on a quest to enact his final wishes... but will she actually do it? Even if she tries to do it, will she succeed?

Morbidly humorous and set in a surreal world where piracy flourishes, "Joe Is Dead" deals with themes of loss, fitting in, and bonds of trust between people.