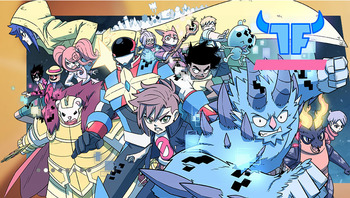 " is a webcomic found on Webtoons, created and drawn by Keon Tan.

Meet Hiroshi Jenkins, a rather reserved boy who lives with his mom and mostly just keeps to himself. Though he does have one secret, he has an imaginary friend, a yeti like being he calls Enigami that he talks and interacts with. However one day, he's beset by a boy who keeps pestering him to fight him and not in the traditional sense. See, he too has an imaginary friend and wants to prove he's the better fighter. And he isn't the only student at Hiroshi's school to have a imaginary friend as well. Hiroshi soon finds himself pulled into the battle between these beings, if only just to defend himself, though likewise finds himself making friends as well. But it soon turns out someone else in their area has taken an interest in these friends, and not just for fun and games.