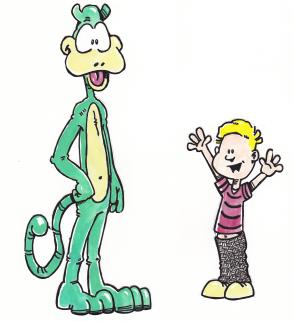 And nobody, but NOBODY should wear a bow tie unless it lights up and spins!!
— Everett

is a webcomic created by Charles Bogle. Originally intended to simply be titled NEWT, the strip centers on Everett Bogle and his titular Newt, who may or may not be an imaginary construct of Everett's mind. Recurring characters include Everett's parents, his brother Riley, a classmate named Lisa, a family of unseen beings living in the Bogle mailbox, and a nameless bird. While mostly staying within the confines of the world of the strip, Bogle does occasionally like to poke fun at the medium in general.