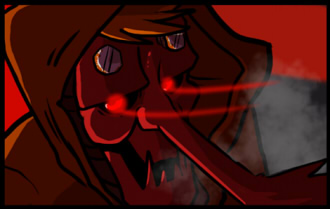 The name Bastardface really fits with this guy

is an online comic hosted on Smack Jeeves that follows Tammy Sullivan, a student by day and the hero Starkeeper by night. The story takes place in Centro City, a place that appears nice enough but hides a dark underworld of slums and gang violence. One gang in particular known as Badstar is Starkeeper's number one enemy. She spends many a night of her summer vacation ruining everything they do, and it's not until school starts again that things become serious. A rogue known as Bastardface opens her eyes to a darker side of Badstar, and she's in far deeper than she wanted to be.

This comic will soon be rebooted on its own website domain. The comic is starting over with an updated plot. When the comic starts up again, the old tropes will be removed.

Note that the YMMV and Trivia tab lead to an unrelated videogame of the same name.

The first run of the webcomic provided examples of: