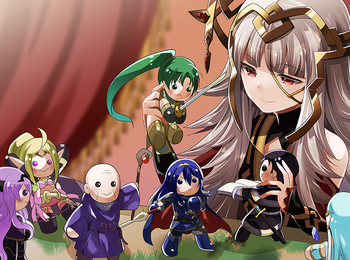 Fire Emblem Heroes: A Day in the Life is an officially licensed 4-panel webcomic based on the mobile game Fire Emblem Heroes. Since the game is light on plot, this comic focuses on comedy with a short gag-per-chapter format.

The comic draws on knowledge of a number of in-jokes, characters, and mechanics that aren't properly elaborated upon in Heroes itself, and so seems to be aimed at long time series fans rather than casual players.

The comic initially had no official translation, but it eventually received an official English translation starting with Chapter 100. The home page for the English version can be found here

, and the Japanese version can be found here

A Day in the Life provides examples of: