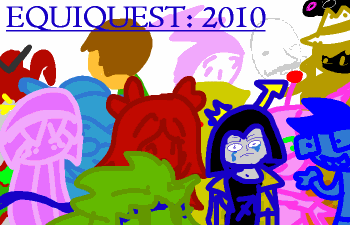 Equiquest 2010 is a Homestuck fan comic written and illustrated by Weather Report and Trish, with contributions from other users including pavlove, Orange Aipom, Flairina, and possibly you.

Although as of Feb 2, 2013, it only spans 46 forum board pages (including command suggestions), the readers have completely lost track of how many pages it has to its name, as the comic is quickly outpacing Homestuck itself in terms of update speed and pages per day.

The plot centers around (who else) Equius Zahhak, who in the real world is a student who goes to school with all the other (human) Homestuck trolls and kids. Andrew Hussie is a total creeper, who inserts the people from the town into his comic while living out of motels and sneaking around outside the school to take pictures. It is the day that Equius was formally introduced in Homestuck, and when Equius sees it... well, he goes to confront Hussie about it. But Hussie has unknown abilities, and somehow sucks Equius into Homestuck itself...

Invariably, many of the other kids from around town end up getting sucked into the story as well, while their friends back in the real world start real time texting them advice. Homestuck starts advancing at break neck speed, while those still not trapped by Hussie desperately try to unravel a conspiracy that's been going on for many, many timelines repetitions. Every Homestuck character has a real world counterpart, so there are a TON of subplots going on in the meantime.

Oh, and be prepared, for these are the REAL MS Paint Adventures.