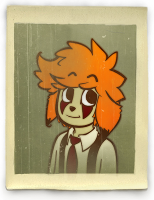 End of Infinity is a MMIC, or Multimedia Interactive Comic (Pronounced ˈmi-mik), produced mainly by Cari 'MiX' Garafalo, and set in a time of recovery long after an immense societal collapse. It's also about a literal dreamland called Phantasmagoria.

The main character, Cläus "Jasz" Joplin works as a mail carrier, delivering the post with the help of his trusty plane and his sister Malicent. However, after he receives a package addressed to him (the first one he's ever received), he is catapulted into adventures he could never have imagined. Now, Jasz must figure out what happened while learning more about the new world he's ended up in.

Reader interaction is heavily encouraged, mainly through the use of "Telegrams", messages in a telegram format addressed directly to the characters.

End of Infinity began on September 12, 2011, and was originally hosted on Tumblr, but got its own dedicated site on the one year anniversary of its release.

The comic itself is right here

Jasz: Ok, yeah, I think right about now is where I just started nodding through Mate's recounting of the events... accuracy may vary? I take no responsibility for what went down in this portion of the story.
(Then, one page later, Jasz interrupts when Silver says something)
Jasz: AAABAPBAPDATDAT SHHhhhh... SHOOSH. No, no, no, stop. Shush. My story.