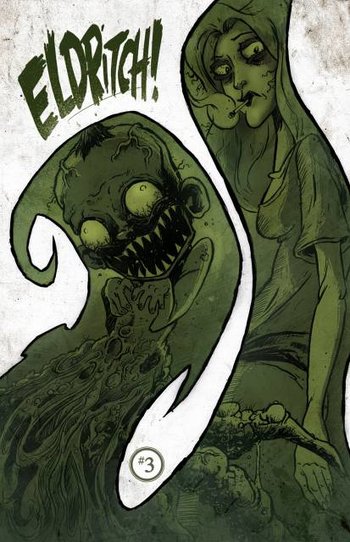 is an Urban Fantasy comic, focusing on the strange events in the life of Faith, a lycanthrope trying to learn the ropes, and her pack of unusual friends: Maggie, a self-proclaimed "Crowtengu", Dylan, a developing coyote spirit guide, Todd, a Bzou (or fairytale wolf), the mysterious Seamus, and Gaoth, one of the fae folk who is not only the local "Oberon", but also owner of the paranormal bar and nightclub The Layline.

Eldritch was created by Shawna Garrity, AKA Nashoba Hostina, as a means of tying as many of the characters and concepts in her head together into a cohesive whole. The comic project itself was started while she was earning her Bachelor’s of Fine Arts, and she has continued it though the completion of her degree. However, many of the characters and concepts of Eldritch were conceived of long before the actual start of the comic, and may be viewed in her DeviantArt gallery

Unrelated with the same-name indie game