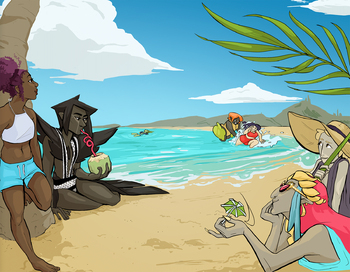 is a Science-Fiction webcomic illustrated by Finn Lucullan and written by Kate Larking.
Advertisement:

Humanity and the avian Ornos attempt to hold a Peace Conference aboard the HSV Concord, which is rudely interrupted by Stuff Blowing Up. After the blast, Ketier, sole survivor of the Orno's Succession Crisis and Spare to the Throne, is stranded on a Ghost Planet with a Ragtag Bunch of Misfits and things go to hell quickly.

With only a few of xeir original crew left, and a ramshackle assortment of super powered humans, will xe manage to survive and possibly claim the throne?

The cast is comprised of:

Crash and Burn contains examples of: