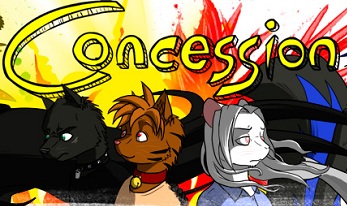 is a Furry Comic centering on a group of movie theatre concession workers.

The series originally started out as smart remarks the author Immelmann could never make when they worked at a concession stand, but it gradually evolved into a complex story, with a fair amount of Mind Screw. The plot centers on a rather small cast, the main characters eventually being Joel (the Villain Protagonist), Artie, and Matt.

On October 8, 2010, it was announced that the comic was coming to an end. Immelmann cited the often nonsensical and convoluted plot as the main reason. They do have a new stand-alone gag comic titled Ballerina Mafia, which began about a month before the end was announced, and a storyline-oriented comic titled The Order of the Black Dog, which started in April 2012. The final comic was posted February 11, 2011, and a "ten-year anniversary" epilogue was posted in July 2016.