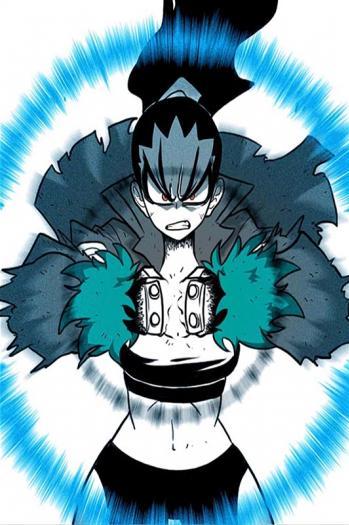 Burner all fired up
Advertisement:

In the autonomous city of Graymark all crime is punishable by death, even if its just spitting on the road. The city is divided into six Blocks all controlled by a powerful Administrator whose job it is to find criminals and kill them. By far the worst district to live in is Block 5 because of the overzealous and over powered Administrator, Great. A man who will stop at nothing to eradicate any and all crime. Its in this crazy city that we find our main protagonist, a young woman by the name of Burner. Content to keep her head down and just try to make enough money to get out of Block 5, Burner spends her days as a punching bag for the elite rich people slumming it in Block 5.

Burner's life changes though when she sees a young boy being kidnapped by an "Anteater" professional kidnappers who steal children for various reasons, none good. Showing off her prodigious martial arts skill, Burner makes quick work of the kidnapper and frees the boy. The boy runs away and feeling she did a good deed Burner goes home. But the next day she finds the boy has been killed by Great for stealing a teddy bear. In a rage she goes after the man, sick and tired of all the death and fear she has had to live with. Now she vows to stop Great once and for all.

Burning Effect is a Korean Webtoon created by Tae Hyeon Park and published on the webtoon site Daum.

Tropes Present in this work