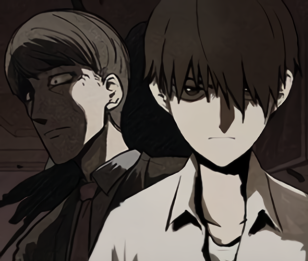 Jin Seon is far from an Ordinary High-School Student. For one, he's raised by his single father Dongsoo Seon, the popular and charismatic CEO of an influential company. For another, due to a severe childhood "accident" that stripped him of his memories and the use of his left eye, he has artificial valves in his heart and pins and plates in his joints.

Also, his father is a serial killer, and Jin is his unwilling accomplice.

Bastard was a 2014 psychological thriller webtoon by author Carnby Kim (City of Dead Sorcerer) and illustrator Youngchan Hwang. It was hosted on Naver and updated weekly before finishing in 2016. The official English translation can be found here

Not to be confused with the unrelated manga series Bastard!! (1988).