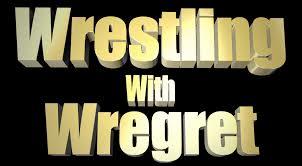 Wrestling With Wregret is a Video Review Show on YouTube that is hosted by former independent wrestler and current independent manager Brian Zane. Zane takes a look at some of the strangest, silliest, and stupidest things in Professional Wrestling, and explains in depth why certain angles, gimmicks, and moments were terrible, while adding plenty of jokes to keep the reviews entertaining. He's also covered wrestling themed movies, such as Ready to Rumble, No Holds Barred, Sting: Moment of Truth, and Body Slam.

He also does shorter, vlog reviews on documentaries and pay-per-views on the channels, as well as vlogs giving his thoughts on recent wrestling news. Zane has also produced three spinoff series; Kayfabe Kitchen, offering recipes given by wrestlers; Getting Into the BiZ, where he gives advice to aspiring wrestlers; and Who War It Better, where he compares and contrasts each week's episode of Raw and SmackDown and determines which one was the better show. Who War It Better was largely retooled in October 2019 to cover the weekly episodes of WWE's third brand NXT and All Elite Wrestling's own TV series Dynamite called Wednesday Warfare, before the Warfare branding was eventually dropped altogether when NXT moved to Tuesdays. Reviews for episodes of Raw and SmackDown still went on in separate videos, sometimes by Zane and sometimes by a contributor, until Zane announced in 2022 that Raw and SmackDown reviews would go on indefinite hiatus due to the workload involved.

You can find him here.

Wrestling With Wregret contains examples of:

Zane: Be sure to thumbs up this video, subscribe to Wrestling With Wregret, and as always, buy the T-shirt! I'm Brian Zane and I'll see ya next time!