Web Video / Will It Soft Serve 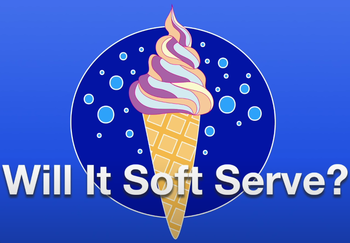 "I'll be putting everything except Ice Cream through the soft serve machine!"
Advertisement:

Will It Soft Serve?

is a Web Video Series produced by The Technical Difficulties member Matt Gray. It is an episodic series where once per episode, Matt puts in an unusual foodstuff in an ice cream machine, and see if it makes for good ice cream. Hilarity Ensues.

And while Matt has created soft serve variants of things no reasonable human being, Nothing is off limits to the series, be it sweet or savory; Mayonnaise, Hummus, HP Sauce ...Neapolitian Ice Cream.

Compare with Will It Blend?, a similar series used to sell a line of blenders.

There hasn't been an episode since October 2020, and Matt revealed the fate of the series here on March 27th, 2021

, in that he found it boring and that the machine will be sold or binned, therefore making the series officially cancelled after 31 videos.