Web Video / Where are the Joneses? 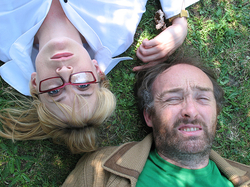 "Your dad's not your dad. Your dad's a sperm donor. And I'm your sister."

Where are the Joneses? was a British sitcom and internet project, created by Baby Cow Productions and sponsored by Ford of Europe, which aired on the internet in 2007.

Starring Emma Fryer and Neil Edmond, the faux-documentary series followed Dawn Jones, a British woman who discovers her father was a sperm-donor whose donations spawned twenty-eight other children. Together with her new-found brother Ian, and documentary filmmaker Jonti Bloom, she sets out on a trip across Europe to find and meet each of the remaining siblings.

The series ran for three months in 2007, with a short episode varying between three and six minutes being posted on YouTube and their website wherearethejoneses.com every day. Described as 'Wikipedia-like', the series was notable for being collaboratively written using submissions from users through wikis and social networking sites. It was also filmed on location throughout various parts of Europe.

The show spawned an unofficial somewhat-spinoff series concerning Jack Nibbs, a lonely man desperate to proof his validity as one of the Joneses, which eventually crossed over into the main series itself several times. After three months, both the main and unofficial series came to an end. The possibility of a return for the series was briefly hinted at, but as of 2012 no more information has surfaced, leaving the project effectively dead.

Where are the Joneses? contains examples of: