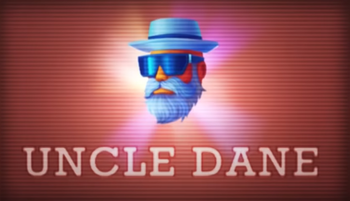 is a Team Fortress 2 Youtube Personality who specialises in creating informational videos on the game that largely center around The Engineer class from that game.

The name comes from an old skit of his; Uncle Danes' Famous Hot Cocoa

that, according to Dane himself "just sounded right", and they used as their handle when starting out making Team Fortress 2 videos online.

Has a secondary channel; the memetically titled 2uncle2dane

and Whatever We Want

, a sketch comedy channel also featuring Dane and his friends.

Compare with Lazy Purple, a fellow TF2 Youtube star who focuses on giving tips and tricks to all classes in the game, rather than just the engineer, and Team Service Announcement, an SFM skit series that gives An Aesop to educate new players of the game.

(in green): Makes you a badass in every imaginable way possible
(in red): You will drown in pussy.