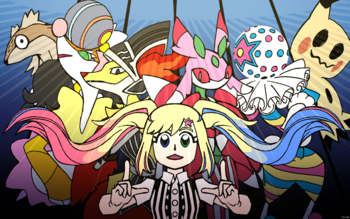 Your circus has arrived.
Source "[TPP-Star] team wallpaper" by krizste

"this hack is a joke and we're the circus act"
— tppmostlynewbie
Advertisement:

Twitch Plays Pokémon Star is the sixth run of the stream's ninth season, which started on October 15th, 2022 and ended on October 22nd, 2022. It featured Pokémon Star, a hack of Pokémon Ultra Moon, which makes use of model swaps and edited dialogue to tell a brand new story taking place several years after the original Alola games (although the version of the game played on stream had all model swaps in the overworld reverted in order to make it playable on real hardware). Pokémon Star also introduces several new Pokémon species, and makes other ones such as Mythicals and Ultra-Beasts more available during gameplay.

Most notable, however, is that the game is overflowing with memes, to the point where it is sometimes hard to tell if it is meant entirely as a joke hack. Those include but are far from limited to references to The Emoji Movie, NPCs being used as mounts, Pokémon being made to look like Cartoon Network characters, Wailord appearing so large that it doesn't fit on the battle screen, and Lillie being re-characterized as a complete weeb with literal dozens of creepy fans cosplaying as her.

Thus, the Voices, playing as a female character named Gg113ktyhh4w (or "Gigi" for short), faced the sheer insanity unfolding before them, sometimes expressing dismay and disbelief in reaction to it, and other times by fully embracing it. Perhaps accordingly, they eventually came to the conclusion of the run having a circus theme, notably due to several team members picked up along the way actually fitting the motif perfectly, including as "Buzzy" the Blacephalon as a clown, "Jenny" the Primarina as a performing seal, "SimFox" the Delphox as a magician, or "Mooimi" the Mimikyu as a puppet.

for the archived status of the run.