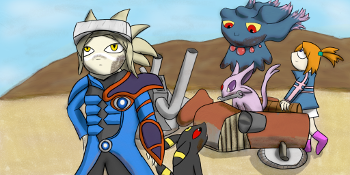 Twitch Plays Pokémon (TPP) is a social experiment in which commands representing buttons on an original Gamecube controller (up, down, left, right, A, B, X, Y, L, R, Z, start, control stick, and c stick) are entered into a chat on Twitch, and then translated into a game of Pokémon Colosseum via an IRC bot. In short, hundreds of people fighting over a controller. Throughout its life, Twitch Plays Pokémon has spawned hilarious characters, memorable moments, and even a religion.

Twitch Plays Pokémon Colosseum, the fourth run of "Season 2", takes the mob to the desert region of Orre. Where Teams Cipher and Snagem are stealing Pokémon and closing their hearts, creating dangerous new Shadow Pokémon. With new challenges like perpetual Double Battling, saving at the dreaded PC, and capturing Shadow Pokémon it's sure to be the most chaotic and challenging run since Red Anniversary.

The lore of this run focuses on A7, a teen who was originally part of the Pokémon Channel project and now trying to survive in the savage wasteland that is Orre after a Nuclear Apocolypse. Having lost his childhood companion Pikachu to his own stupid mistake, he was forced to join Team Snagem to survive. After finally having enough, he defects and steals the Team's prototype Snag Machine. His motives unclear, it is at that faithful day he meets a kidnapped girl named Rui...