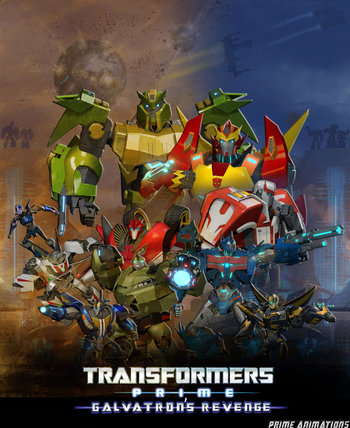 Till All Are One

Taking place after Transformers Prime: Predacons Rising, the Autobots and their allies are working hard in rebuilding their home planet, Cybertron, fully restored from its ancient long dormancy.

While the Autobots await for more of their Cybertron brethren to return, they have to fight off remaining pockets of Decepticon resistance like the mercenary group, the Combaticons.

However, things become more complicated than expected. Ancient enemies have finally awoken from stasis and are now coming for both Autobots and Decepticons in order to finish what their master, Unicron, has started.

Transformers Prime: Galvatron's Revenge is a fan-made project based on the Transformers: Prime television series. The film is helmed by Carlos Barrantes of Prime Animations. A sequel is in progress titled "Dinobots Unleashed".