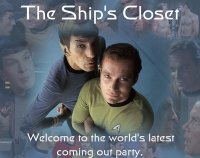 The premise of the show is "A Logical Discussion of Kirk/Spock". The host, Brittany Diamond

, is the author of the well-known Commentary of TOS for K/S

, an analysis of every episode of the series with Slash Goggles firmly in place, and the show is essentially an extension of the analysis. Unlike most slash fans, however, Brittany makes a point of having evidence for every point she makes. Instead of saying, "How can you not see it!?," she splices the relevant clips into her show and dissects motives, thought processes, and physical and verbal expressions to make her case. With training as an actress, she can also refer to the choices the actors must have made to produce those expressions and look at every scene with both a director's and actor's eyes.

However, she also makes point of having fun with it; it is not a dry clinical study but a celebration. Only this time, the celebration has solid proof behind it.

Tropes in The Ship's Closet and Analyzation/Commentary: