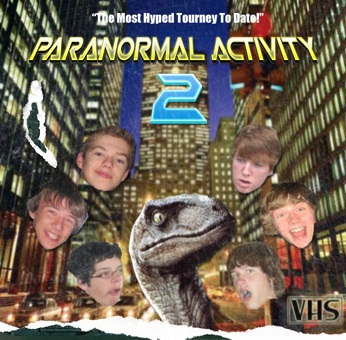 The Original Seven, the remaining members who attended the very first Brawl tourney.note Clockwise from the top-right: Vyzor, Kason Birdman, Sauxuas, Cephalo the Pod, Spam, Alpha Delpha. In the centre: The Notorious Tiggs (not actual picture).
We bring the rain.
Advertisement:

From the small Canadian town of St. Marys comes a small group of friends who love to play Super Smash Bros. Melee. On occassion they host tournaments to test their competitive skills. These videos normally get uploaded to their Youtube channel

. Other miscellaneous videos include come from their Minecraft server and a Mario Party 3 Let's Play. But what really defines the Crew is their love of the dramatic. The humour of Sharkasm is derived from two sources: over-the-top sarcasm that isn't as much snarky as it is downright bizarre; and locally made, locally known, locally used memes born from random thoughts of the Crew. Often the two overlap.

There are a number of eras making up the history of Smash in St. Marys.

The original group consists of:

Others who frequently play with the Crew and attend tourneys include:

Sharkasm has a number of tournament series, each one identified mainly according to the house the tourney took place in.

Other works, some in progress, by members of the crew include:

The Crew have their own forum, The Sharkasm Empire