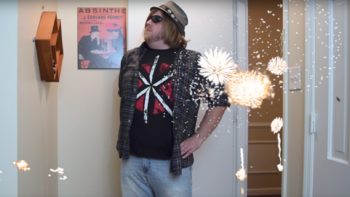 "I'm Crash Thompson, and remember: the only opinion that really matters is your own. Cheers."

Crash Thompson (formerly known as The Rock Critic) is a YouTube music review and comedy channel, running since August 2012.

As the name implies, the channel mainly focuses on rock music, as well as adjacent genres such as metal, alternative, and the occasional foray into pop (provided the artist in question either has or at some point in their career has had some sort of rock influence). The channel consists of full-length videos that delve into a specific album by a notable rock band - usually one that stands out sharply from the band's other output in some way, be it in sound or critical reception - in detail, lengthy retrospectives that cover the entire careers of bands across multiple full-length videos (The Rise And Fall Of

Weezer and the Green Day Retrospective

), "Quickies" which are shorter videos that cover recently released albums with Crash talking over footage of the band in question accompanied by brief visual gags, year-end lists of the best and worst albums of the preceding year, other series like Bad Album Covers and I Love This Song / I Hate This Song, all three of which are pretty self-explanatory, and a smattering of livestreams, Q&A videos, and subscriber specials, the three of which often overlap.

before being moved to the main channel for the remainder of its run) wherein he talks about video games.

He is one of the four online music critics making up the Rock Coliseum collective, alongside ringleader Luke Spencer of Rocked, Mark Grondin of Spectrum Pulse, and Jon Compton of ARTV

, who do a regular livestream game of voting bands and albums selected by the chat to “live” or “die” (the latter in some creative and thematically ironic way) in a coliseum setting, as well as doing podcasts and attending events such as music festival Sonic Temple together.

, a wrestling podcast chronicling the many, many wrestling shows that occurred over Wrestlemania weekend of 2019, but had to leave the podcast due to scheduling conflicts.