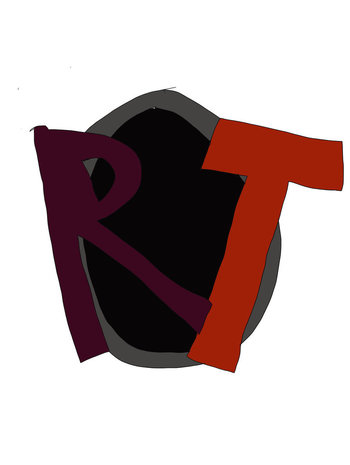 Don't trust this logo. The series is anything BUT bland...
"Sup guys, this is Z-Squared."
— Z Squared
"I am floating in space. Accessing my next move. Of what I shall do, I have decided. My duty is to seek out film. To explore them through the course of time. After all, with a name like Sir Cinemacus, what else do you expect? A bit of a rushed decision but life is wasted unless you take action. Now to find team members....the less than enjoyable way..."
— Sir Cinemacus, starting the fanfic series proper and the chaos that follows...

The review team is a duo of 2 brothers working on Deviant Art and Youtube. One is a living suit of armor (Sir Cinemacus) and the other is an immortal teen (Z-Squared). One reviews science fiction, horror, and fantasy films of all kinds and the other just reviews whatever he considers trash.But the real reason it's considered a team is mostly on the knight's part. He has organized quite possibly the largest and most over the top X Meets Y scenario ever! Characters that include Godzilla and guys from MLP are present, and their story is told through a series of Fanfics on Masterof Nintendo's profile on Deviant Art. As time goes on, who knows what hijinks might ensue.

As of 2016, the videos have slowed to a crawl with little chance of returning (aside from various YT Ps and skit videos), thus the whole thing is dedicated to the fanfic series now. Soundtracks and credits videos are also made in conjunction with them. Also, the series has gone on hiatus...kind of. The art and even stories are getting a massive overhaul and reception has been quite positive in regards to that. Other things aside from the series (such as shows like Steven Universe and such)have been focused on during so.

Several "Arcs" have come of this. They are currently getting their own trope pages as the artwork is going through a massive redoing. Among them are:

Arc 1: The Rise of Golus