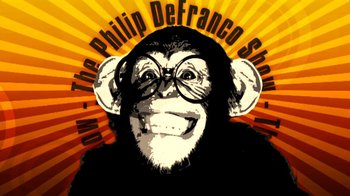 "I love yo faces."
"'Sup, you beautiful bastards? Welcome back to The Philip DeFranco Show, and let's just jump into it!"

The show uploads regularly, with news videos being posted Monday-Thursday, as well as a special "Friday Show" where Phil covers fan-requested stories and stories from earlier in the week that he couldn't cover due to time (originally dedicated to answering fan questions on news stories covered in the week). In April 2016, Phil bumped the show's upload rate to 7 days a week with the additions of two zanier, community-based segments called "NSFW Saturday" and "Sunday Funday". These segments have since been discontinued.

In every show, Phil picks three to five current news/politics/pop culture items and gives each of them a brief (1-2 minute) treatment, with his own, frequently acerbic, opinions and commentary added on. Interspersed with these are recurring segments:

Each item is accompanied by a link in the description to further details. He often asks questions and encourages fans to answer them in a comments, since he believes that the PDS is less of a show and more of a conversation.

The PDS has become popular enough over its multi-year run that DeFranco has been invited to do news shows at various political events, including the Republican and Democratic National Conventions. It has spun off additional channels, such as SourceFed (multiple daily news videos), SourceFed Nerd (like SourceFed but for games, movies, and tech), and ForHumanPeoples (a variety channel as well as the name of his merch company).

Today in Awesome, brought to you by TV Tropes:

"As always, my name's Philip DeFranco, you've just been Phil'd in, I love yo faces, and I'll see you tomorrow."