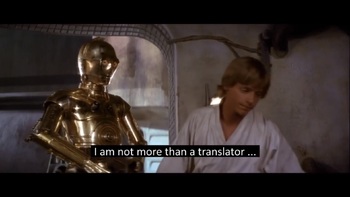 Blow the Skin, Leaning on the Fourth Wall.
This is civilization having period the war.
Treachery spacecraft from the secretive house,
hit the first fight against the Milky Way emperor evil.
Rebel army spy management during the war.
Steal the empire death star final the weapon,
is the clothing station wagon sufficient to eat all star.
Princess Leah is the black imperial agent fuck.
Pursue the ship the janitor of the robbery design.
Kill her people the Milky Way recovery is the
Advertisement:

Star War: The Fourth Gathers: The Novelty Desire is the long-awaited sequel/Spiritual Successor to Backstroke of the West, being a Gag Dub of Star Wars Episode IV: A New Hope. Originally released

in late 2016 as a Gag Sub as part of the launch of The Star War Gatherings, it is the first Gag Dub of a feature length film made as part of the online project The Dub Gathers

, and the first full adaptation of one of KnifeOfPi2's Gag Subs. Created with the magic of Recursive Translation, it distorts the familiar story into barely recognizable insanity, which is then performed with the utmost conviction.

The subtitles can be read here,

and the shooting script here.

The final film, which was released on April 1st, 2019, can be viewed here

. That link was removed but re-uploaded in parts here.

We trope be die:

TV Tropeseses, you must remember that the Wish Power is with you.