Web Video / The Misfortune Of Being Ned 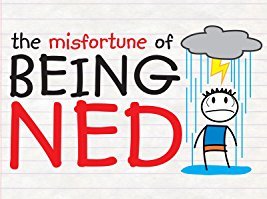 This show is a short-live web series; created by The Annoying Orange creator, Dane Boedigheimer. The series lasted from October 9, 2013 to April 23, 2014. The series involves a rather happy-go-lucky 12-year-old kid named Ned (voiced by Youtuber Steve Zaragoza) as he goes on his adventures and ending in rather painful (sometimes deadly) predicaments.