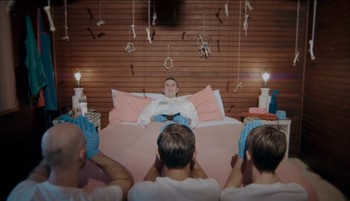 Good night, children.
"Everything boils, everything bleeds. And that's why it's important to have at least one wet vac in the house. But everything becomes dust. And from dust we find that in the dust are entire worlds where anything can happen."
— Curtis BTS:34:47:MTR
Advertisement:

A short webseries by Wham City, the comedy/horror collective that made This House Has People in It, The Mirror follows the Children of The Mirror, a Cult awaiting The Return, when Things will come through your Tindalos Doorways. They won't give you a running start.

The show is a series of six training videos for cult members, put together by cult leader Curtis, along with his closest disciples Reece, Fanny, and Wesley. Though there are evidently 98 in the series, we only see six — #5 Creativity, #8 Altruism, #13 Cleanliness, #28 Water, #56 Cleanliness II, and #98 Interstellar Telepathic Communication.

Though mostly comedic, the series gradually gets darker throughout its run, as Curtis begins to become more erratic. The end, though, leaves open the question of whether he's paranoid, or far too sane.

The Mirror provides examples of: