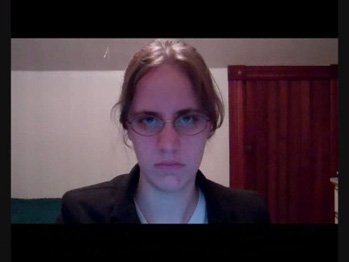 One way to tell the story's not gonna be good.
Hello, I’m the FanFic Critic. I read it, you listen.

The FanFic Critic is a Video Review Show hosted by a fictional character of the same name who reviews fanfics, bad or good. The character is portrayed by the video creator, Megan Wessels. The FanFic Critic is known for being honest and harsh about the stories she reviews, and often dramatically overreacts when the story is particularly awful. The series can be found here

Wessels was one of the hosts and creators of The Net Dwellers, and she also contributed to Reviewers Unknown and Manic Expression. Following a yearlong hiatus, Wessels announced on October 30, 2015 that she was ending The FanFic Critic. In April 2016, Wessels returned to reading fanfics on a new YouTube channel. Her new series, named The Fanfic Critic Vlog, is not a continuation of this show or the character, but rather Wessels reading the fanfics as herself. Her new YouTube channel is here

, though as of this writing, she has not uploaded in over a year.

Not to be confused with The FanFiction Critic, though they are friends.

Tropes featured in The FanFic Critic include: