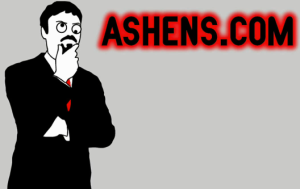 He co-starred in the sci-fi webseries/ARG The Proxy, which ran through March 8th-17th, 2012. Unfortunately, the contest aspect, not-so-subtly sponsored by Alienware, was available only for those living in the UK. Regardless, it is available to watch worldwide here

He has made two crowd-funded films. The Quest for the Game Child, is a Z-movie in which he searches for the eponymous knockoff game system, while Ashens And The Polybius Heist is a fully produced indie film in which he organizes a team to steal the only remaining copy of the eponymous urban legend. He also appeared in the Science Fiction film The Darkest Dawn.

His site is here

(his overflow channel is here

) and his Twitch channel is here

, which is usually live on a Wednesday. He also served as the narrator for Ninja the Mission Force, duplicating the Large Ham British narrator of Godfrey Ho's films. In 2016, he and Internet chef Barry Lewis created the channel Barshens, which is available to watch here

The works of Dr. Ashen provide examples of the following tropes:

YOU HAVE SHOWN THESE HUMANS TOO MUCH