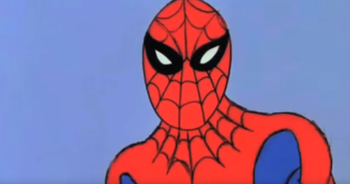 "Something is wrong with my face!"
Hm, looks like I'm fucked.

A Redub of the 1967 Spider-Man cartoon, as done by MW10T (short for Man With Ten Toes), recasting the already low-quality series with adult humor. Spiderdub is known for its surprisingly good production values and more or less re-cutting the original footage into a tangentially related storyline. Despite its source material, it's somewhat inappropriate for younger viewers.

The first episode can be seen here

, and all following episodes have been uploaded to MW10T's second account, located here

. Remastered (longer) versions of episodes 2-4 can be seen here.