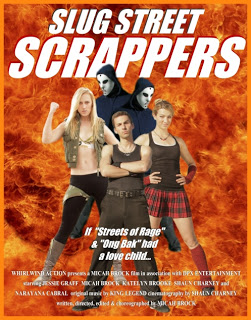 ...it would have equal parts awesomeness and brawling babes.

Slug Street Scrappers is a web-video series with a storyline that was created by fight choreographer Micah Brock and the Whirlwind Action independent film group, and was largely influenced by video games of the 1980s and 1990s, including the Final Fight, Streets of Rage, and Double Dragon series. Consisting of equal parts comedy, action, martial arts and back-story, the series consists of nine videos which are available for viewing on YouTube.

The titular Scrappers are street fighters, of varying martial arts disciplines, who have been selected by a mysterious benefactor who is known by many names, but is often referred to as "the Revered One," to compete in a tournament for the title of "Toughest in Town." This reward is an honor which can only go to the strongest Scrapper in the district and which rewards the wielder with a monthly stipend of $10,000. The end result is that Bruiser Bom-Bash (played by Brock), the main character and current holder of the title, frequently gets challenged by other Scrappers desirous of claiming his crown.

However, nobody knows what the Revered One's motives are, or what his intentions are for the "Toughest in Town"...but the tournament he has organized may yet provide answers to those questions.