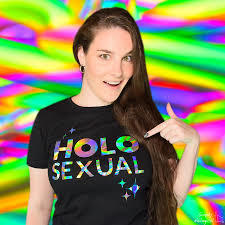 Holo, it's me, Cristine, again...
Advertisement:

is a nail art channel on YouTube which reached notoriety when creator Cristine Rotenberg decided to apply 100 coats of nail polish, spawning the "100 layers challenge" trend. Cristine's videos feature plenty of silliness and her crude humor in addition to genuine nail art tutorials, and she frequently ropes her family and her boyfriend, Ben, into her antics. Holographic patterns are a recurring theme.