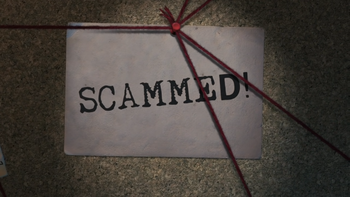 (a YouTube channel dedicated to scambaiting), created in collaboration with fellow scambaiter Pierogi of Scammer Payback

The series focuses on intercepting refund scams (aka overpayment scams), a type of tech support scam which involves the scammer demanding repayment from their victim after "accidentally" refunding them too much. Pierogi masquerades as a prospective victim of refund scams using a variety of pseudonyms and a fake bank account, agreeing to send the overpaid funds to a recipient (often a middleman, based in the same country as the victim, with connections to the scammer) in a package. Unbeknown to them, however, the package doesn't contain anything of monetary value, and will instead be intercepted by the Trilogy Media duo as it makes its way to the recipient while also confronting them in person.

Pierogi has his own coverage of the series here