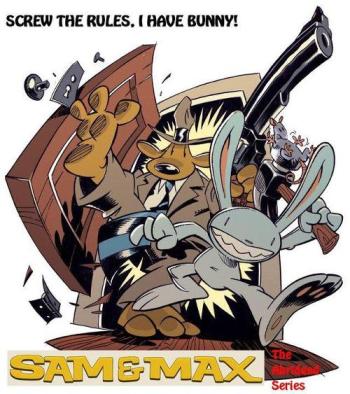 Sam: I have the feeling we won't see any more action until at least two months from now.
Max: You mean this episode is over already?
Sam: Yep.
[Beat.]
Max: God dammit.
Advertisement:

Sam & Max: The Abridged Series is a Gag Dub and Affectionate Parody of Telltale's Sam & Max: Freelance Police games. The Abridged Series is created by a guy named David DeLorenzo (known as LACOSAM on YouTube). And like all Abridged Series, Sam and Max Abridged compresses each and every single episode of the actual series into an under-fifteen-minute "episode" - and the original episodes were already short to begin with! In the first episode, LACOSAM himself voiced all the characters, but later episodes have had characters voiced by other Sam and Max fans, including Gohaku (who voices Max from episode 2 onward), Remolay, Divisionten, and StrongBrush1.

Since Telltale currently has no plans to release a new Sam & Max game in the year 2011, LACOSAM hopes that this series will tide over fans of the famous suit-wearing dog and lagomorph until then.