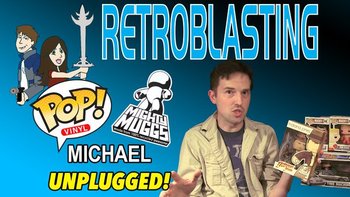 Gotta get back to the past, to the 20th century....
—The theme song

Retroblasting is a youtube channel run by American couple Michael and Melinda. They specialize in geek culture from the late 70s, 80s, and early 90s. Also featured is their 12" Darth Vader action figure, who is perpetually missing his arms.

The show runs heavily on nostalgia for Generation X. As such, it features franchises from that era such as Star Wars, Transformers, He-Man and the Masters of the Universe, and the like. The most common things reviewed are toys and cartoons; there are also episodes dedicated to restoring the merchandise of the era to its original condition.