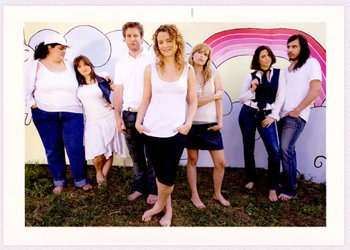 Plan V is an Argentinian web-series about a group of four lesbians and how they manage their life. The title is a pun between a "plan B" and the lesbian V sign note The symbol is for cullilingus (the V sign + moving your tongue). Done by a women, it's interpreted as lesbianism

It begins when Lorena falls in love with a woman she bump into on the subway, only to discover a few moments later that she was no other than her sweet-brother's girlfriend. The thing is that this girl might have feelings for her as well, making the situation a little bit messy.

The rest of the cast include Flor, a Lovable Sex Maniac; Mara, a Clingy Jealous Girl; Pato, her butch girlfriend; their boss (who is also Pato's brother) and Dario,their co-worker. In case you haven't noticed, this is a text-book example of Cast Full of Gay, where every character is either gay or blood-related to the main cast.