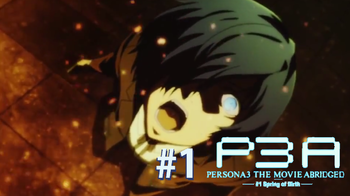 "I'm, uh... I'm thinkin' we don't need to help." - Akihiko Sanada
Yukari Takeba: There was a time when I seriously thought about dying, or... Or killing myself—
Makoto Yuki: You probably should have.
— Persona 3 Abridged

Persona 3 Abridged is an Abridged Series of the Persona 3 Movie Series, created by Blackmageabradged in 2015. The first episode can be found here.