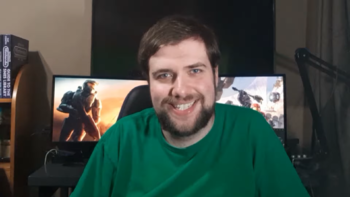 By viewing this image you are near Chris yourself.
"Play on 'near miss'?...How little do you think of me?!"
— Chris talking to the person who chose his username.
Advertisement:

Christopher “NearChris” Wengert, formerly SmashMasterShow, is a New York City YouTuber personality who hosts a Video Review Show. The channel offers two main shows: Smash Master Show (the main show, generally game reviews) and Top 10 Lists (self explanatory). In addition, the channel also hosts reaction videos as well as a slew of various videos based on whatever Chris feels like making. In 2013, he opened a second channel called SmashMasterStuff (now renamed "NearChris 2: Now with Extra Beans") where he uploads videos that wouldn't fit on his main channel as well as various old videos of his.

On July 2nd, 2020 during a livestream, Chris confirmed

that due to controversies surrounding the Super Smash Bros. community he would be retiring the name "SmashMasterShow" and the nickname "Smash", with a full rebrand to the name "NearChris" happening on August 23rd, 2020.

, and his second channel here

open/close all folders
SmashMasterShow era
As of August 23rd, 2020, every video during this time period was rebranded from "SmashMasterShow" to "NearChris."

SmashMasterShow was Chris' main (and self-titled) show, typically where he would review a game.

Exactly What It Says on the Tin. Sometimes were categorized under the SmashMasterShow label.

Every year on April Fools' Day, Chris likes to make a video in which he intentionally tries to rile people up.

Most times a major video announcement happens involving a franchise Chris is a major fan of (typically Super Smash Bros. or Kingdom Hearts), he will stream his reactions and then upload them to YouTube later.

Videos that Chris has made that don't fit under other categories.
NearChris era

Videos that don't fit into the other categories.
Advertisement:

The ending joke I originally had turned out to not be that funny. So here's a TV Tropes stinger instead.