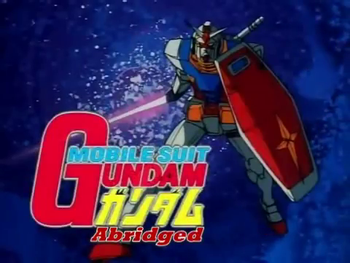 This is where it all started, Mobile Suit Gundam, the ambitious project of anime legend Yoshiyuki Tomino that spawned the "Real Robot" genre of mecha anime and a cultural cornerstone of Japan. Now condensed and parodied lovingly by some American Gundam fans who use Alternate Character Interpretation on the show's memorable cast, potshots at the show's dated animation quality and outdated sci-fi gadgetry to make a hilarious, and still rather faithful (for an abridged series) adaptation of the original series. Also notable for never (outside the first episode) breaking the forth wall.

GWS announced that due to circumstances beyond their control

, they won't be able to continue the series and instead are now concentrating on the Patlabor franchise.

A prequel of sorts

abridging Mobile Suit Gundam: The Origin was announced, but seems to be abandoned.

The creators of the series, Gutted Wren Studios, can be found on their YouTube