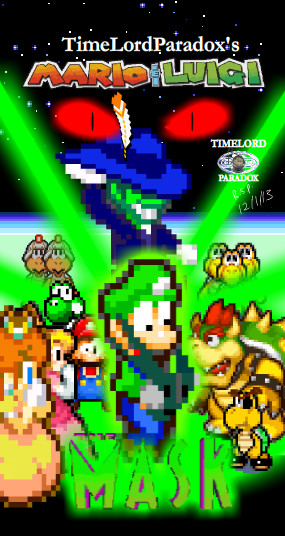 Mario & Luigi: The Mask is a Web Video/Fan Fic Crossover between Super Mario Bros. and The Mask. The fanfic can be read here

, while the web series can be seen here

The series first begins centuries in the past, when the Mushroom Kingdom and the Koopa Troop of that time join forces and chase down a creature that had ravaged both of their troops and homes. Upon tracking it down to a Warp Pipe, they bury it alive and use magic to seal it in, hoping that it will never be found and used again...

In the present day, having put up with constantly living in Mario's shadow and being seen as nothing but a joke and a cowardly sidekick for long enough, Luigi has grown sick and tired of it and wants nothing more than to be the big hero for once. He finally gets his chance when he finds the very object that the ancient Toads and Koopas sealed away long ago: the Mask of Loki.

Finding out the Mask's properties quickly, Luigi keeps it a secret from Mario and uses it to become a superhero he dubs Green Thunder; however, Green Thunder is incredibly impulsive and goofy, and often prolongs conflicts and leaves destruction in his wake.

To top it all off, a mysterious creature dubbed Ouroboros sides with Bowser and manipulates him into trying to find the Mask for himself...

Mario and Luigi: The Mask contains examples of the following tropes: