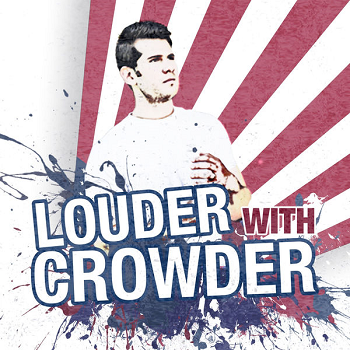 You're a strange animal, that's what I know...

Louder with Crowder is a political satire YouTube series hosted by comedian Steven Crowder. It can be viewed here

. Crowder gained notoriety for his hidden camera work in 2008 where he investigated the Canadian Universal Health Carenote Long lobby waits (up to 9 hours), stated months-long backlog for medical treatments and being dismissed as "you're young, you'll be fine"., which earned him some time as a Fox News Commentator before leaving and creating this series in association with Blaze TV, while also encouraging external support through his "Mug Club" membership (where you get a large ceramic mug etched with the "Lowder with Crowder" logo).

He freely admits to having a conservative right wing viewpoint, but notable for its surprisingly heavy emphasis on comedy for a podcast which primarily discusses political topics, Crowder often focuses on heated issues such as gun control, transgender rights, and economics. In many respects can be more comparable to regular Late Night Talk Shows with the use of sketch comedy, but also often goes on location for politically-themed hidden camera pranks and "Change My Mind" discussion booths. Guests such as psychologist Jordan Peterson, Hollywood actor Dean Cain, and lawyer/activist Ben Shapiro appear from time to time.