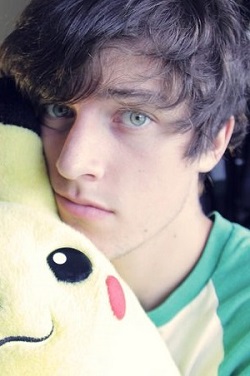 Be careful. People have been known to get lost in his eyes and come back years later, emaciated and speaking Russian.

KickThePJ, otherwise known as PJ Liguori, is an English YouTuber, filmmaker, artist, storyteller and musician who's been making videos since 2007. He's best known for his highly-stylized, reality-bending, bizarre and often down-right freaky style of storytelling in various short films, as well as for his incorporation of animation into live action videos. These are frequently juxtaposed with more light-hearted, casual videos where he rambles about things that have been on his mind - albeit still peppered with surreal non-sequiturs - with occasional detours into videos about his artmaking processes or trying out new forms of art. His style is varied, to say the least.

PJ started making videos late in secondary school when he was about 15, usually just playing around with his friends. None of these videos ended up online and have since been lost. Like many YouTubers of that era, he initially began posting videos because he was bored. These early videos were more low-key than his later work would end up being, usually of him playing guitar or in some way discussing something he liked or didn't like, in his own uniquely PJ way. As his skills improved, so did his ambition, until his work began necessitating a full team of helpers and collaborators, including cinematographers, actors, lighting designers, effects artists, and more.

As a side note: No one knows what PJ stands for. It is likely we will never know. Just one of those mysteries.