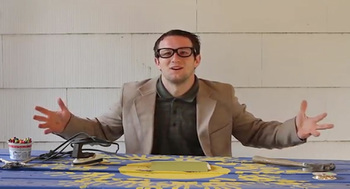 This is how You make an image caption.
"Hi, I'm corner. And this is My Ken."
—Ken, being himself

Ken's Corner was a Web Video Series of shorts created for Camp Maranatha's middle school group. It was based around the concept of Ken (played by Keenan McCurdy) running the camp's craft shop. Hilarity ensues.

The series ran for two years, each one released once per day at the camp. You can view the first four here

and the next four here