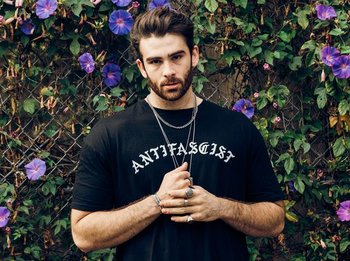 BOOMER
"Wait, so, so, the leader of—the former leader of the American Nazi Party is STILL not a Nazi in your perspective?"
— Hasan in one of his more hilarious debates with a right-winger, [1]

Hasan Piker is a Turkish-American political commentator, journalist, activist and Twitch streamer. He is best known for his work with The Young Turks through his "The Breakdown" video series, hosted on Facebook, as well as the Twitch channel hasanabi, which he runs independently as a way to debate and discuss politics and political news.

Hasan is known for his ability to marry leftist political theory and millenial/zoomer sensibilities, best expressed in the formatting and humor of his "The Breakdown" explainer videos. His straightforward, blunt, "bro" style of presenting his ideas has set him apart from his peers. Crowned "Woke Bae" by a few publications, Hasan has gained popularity online by presenting a traditionally masculine, "bro" personality with socialist, progressive, and inclusive values.

Although he began as more of a journalist than a full-on political commentator and online personality, Hasan has branched out since The Young Turks and has featured other notable personalities in the progressive sphere on his Twitch stream. These guests include H.Bomberguy, Austin from the Austin Show (kind of, the joke is that he's a lib), Kyle Kulinski of Secular Talk, and FREAKING CONGRESSWOMAN ALEXANDRIA OCASIO-CORTEZ (via a collab stream of Among Us), to name a few. In addition, he has also featured callers from chat and Discord for regular debates. He also incorporates gaming and reaction videos to his content as a variety streamer.

Not to be confused with Hassan, a Twitch admin, or Hasan Minhaj, the host of "Patriot Act", or Mehdi Hasan of Al-Jazeera.