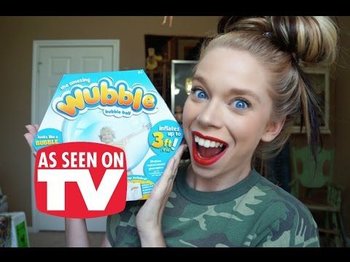 DOES THIS THING REALLY WORK?!
Advertisement:

Bunny Meyer, otherwise known by her username Grav3yardgirl, is a lively, slightly insane, and thoughtful YouTuber. Starting off talking about supernatural experiences, she rose to prominence with her most popular series, "Does This Thing Really Work", where she puts infomercial products to the test. Her other content includes beauty videos and vlogs, and occasional serious discussions about her life. While Bunny may be something of a background star, most fellow creators on the website have expressed their enjoyment and support for her content.

Tropes in Bunny's videos include: