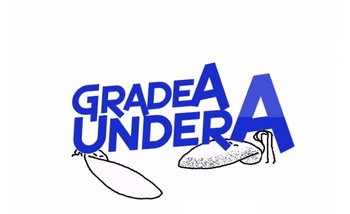 Ever want to hear what a short, crass man with a shovel chin (Grade) and his taller, silent companion (Under) have to say about various topics from the naming of animals, to the problems with YouTube, to politics, to life's hardest questions?

, often shortened to "Grade", comes in.

He is a YouTube content creator from the United Kingdom that makes comedic rant videos that can be summarized as being based around whatever he finds interesting at the moment. His videos can generally be described as slideshows of MS Paint-drawn graphics with his voiceover, combined with some music playing to mark transitions and clips from other videos.

He also prefers to keep his likeness out of his videos and speak through his stick figures. Grade and Under collectively serve as the main "avatar" for the actual man himself, and there's also a slew of recurring characters (including Dickhead, a penis with a face, meant to represent the critical segments of his audience).

His first two videos were uploaded in early 2013, but he didn't start regularly uploading until the fall of 2014. In the years following, he gained millions of subscribers. In September 2017, following roughly a year of an extremely sporadic and unpredictable release schedule, he uploaded what appeared to be his final video

, showing signs that the man needed a break. According to the video in question, Grade had been suffering from serious burnout at the production and editing of his videos, to the point where it began to affect his physical and mental health — he described himself as depressed as a result of it, which made being funny (the focus of his channel) extremely difficult.

After over a year, he finally reemerged with a new video on New Year's Day 2019. He slowly put out a few more, but after releasing "Why We All Hate Valentines Day" in March 2019, he disappeared again. He then resurfaced another year later, when he uploaded four videos from May to June of 2020, before disappearing again. He re-emerged once again in March 2021, and as of this writing, he is uploading, albeit a much less frequent rate than in the past.

He is also active on Twitch

GradeAUnderA demonstrates what happens when you call the DVLA in the United Kingdom.

Example of:
For Inconvenience, Press "1"

GradeAUnderA demonstrates what happens when you call the DVLA in the United Kingdom.